I used to blog on another platform. Check out what I shared in earlier years here.

A few weeks ago we made potato people after our teacher Mrs Agnew had shared a video called “The Potato People” with us. At first it sounded really weird to me but then  Mrs Agnew said, ” ok now we are going to make potato people!” The class was REALLY looking forward to that. Mrs Agnew took out a selection of potatoes and some of them were old and wrinkly, fresh, new ones and a really big one too! Then she took out the art supplies and we got to work!

We used googly eyes, string, pipe cleaners, ribbons, sticks, toothpicks and I made an echidna but after a week or two I made it into an alien! It had sticks all over it and pipe cleaners adding extra character. A few weeks later,  Ms Toland thought our ideas of using  potato people in our movie were great. She taught us about the four important people who make a movie. They are the director, camera man, scene manager and editor. I enjoyed being the director the most because I could tell people what to do.

When we were making our movie we had to have some backgrounds! I was in the group making the rocket and there was also an evil lair, party scene, and inside the castle. The group decided that two people would make the bottom of the rocket and two more people would make the top of the rocket. Then we got to work. The bottom group was going to make so many rocket boosters and the top group was really fast too! Next we had to paint it which was time consuming.

After we had painted we were done.  Then we had to work on the making of the movie, group by group.  We were in the library with Ms Toland and we took lots of photographs as the potatoes moved slowly across the table. In this one scene when the rocket ship flew high and the sunlight was in sync with the rocket! After that we took a break for a while and then we did the voice overs! A friend and I went first and I did my normal voice and he did too but the next time round,  I did a different voice.  Yeah, then we were finished. All right time for a quick story about the movie. The birthday princess gets stolen by aliens and then ninjas save the princess in their rocket. In the end  everyone shares in her birthday party. 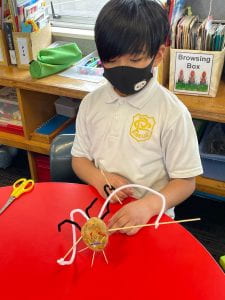 3 thoughts on “Making our class movie.”

About Me | Ko Wai Ahau

Add the link to the About Me blog post here.

Keep connected with this blog